Happy Friday!  Today I have the great opportunity to celebrate Mary Morgan’s newest addition to her Dragon Knight’s series.  Dragon Knight’s Medallion is the second book in this fantastic series.  This book follow’s Stephen and his road to redemption.  This is a fantastic follow-up to the first book in the series, Dragon Knight’s Sword.  For my full review be sure to keep reading after the book blurb.  Be sure to wish Mary a Happy Release Day today!! 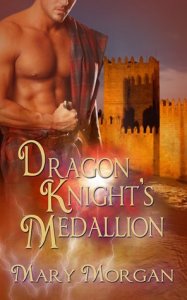 Dragon Knight, Stephen MacKay’s powers are altered after the death of his sister. Now he is plagued with visions that threaten to destroy his soul. When Aileen Kerrigan falls through a time tunnel, he vows to keep her safe, despite the fact the beautiful but head-strong half-blooded fae could be the death of him.
When Aileen finds out her dad is a Fenian Warrior, she flees to a nearby ruin. Armed with the medallion her mother gave her, and a matching one belonging to a long dead knight, she is flung into the past and finds a handsome but surly warrior who is on a quest. Now it seems her future could be entwined with his, if she doesn’t kill him first.

Stephen is one of the cursed Dragon Warriors.  His curse leaves him in debilitating pain after a vision.  This once was handled better when he had his medallion.  But, that is gone and so is his respect for the religion he once was so entwined.  Meanwhile, in present day, Aileen’s world is flipped on its side when she realizes her parents have been hiding her true heritage.  She chooses to run from this over abundance of information and in doing so falls into a time tunnel.  This is where Stephen and Aileen’s worlds converge in a destiny that has been foretold.  The more these two fight fate the closer they become.  As they become even more entwined they realize that a future without the other would be unbearable but there are forces set out to destroy them and the relic that they hold.
I loved this installment of this series.  Stephen and Aileen were great characters and you immediately fell for them.  I also loved the intricacies of this story.  The added complexities of this story really brought this series to a new level.  The dialogue and imagery within the story is fantastic.  It really melds the historical romance of 13th century Scotland and present day.  This story really makes any woman want to find a Scottish relic in hopes she will find a rugged highland warrior.  Overall, this was a great book and I highly recommend this series.  I know I will be waiting with bated breath for the next in the series.