Here is your second dose of Super Sunday.  This is a wonderful story that takes the Robin Hood story and spins it on its head.  It was highly enjoyable and entertaining.  This is yet another great book by Merry Farmer.  For my full review keep reading after the book blurb. 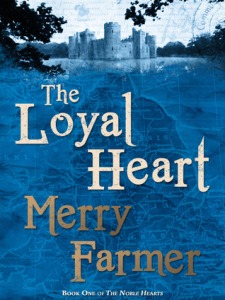 Lady Aubrey has a problem. Several problems. Her childhood love, Ethan, has returned home from the Crusades, but he’s more interested in winning his land back than wooing her. She has to rescue a pair of nuns who are being held prisoner in Derby Castle’s tower by the sadistic Sheriff Buxton. And to top it all off, she’s developing scandalous feelings for Buxton’s lackey, the dark and devilish Crispin. Faced with all that what’s a girl to do but don her disguise as the Derbywood Bandit and take matters into her own hands?
Sir Crispin is at his wit’s end. Not only does he have his hands full keeping Buxton from killing half the shire, now his arch nemesis, the Derbywood Bandit, has joined forces with his old rival Ethan. And that’s nothing compared to the burning torch he carries for his ex-fiancé, Lady Aubrey. He would do anything to win Aubrey’s love …
… until he suspects that there could be a closer connection between Aubrey and the Derbywood Bandit than anyone knows.

You first meet Lady Aubrey while she is dressed as her alter ego, The Derbywood Bandit.  She is stealing from a lord she knows intimately, her ex-fiancée Sir Crispin.   Just as she is about to be found out by Sir Crispin she is rescued by Ethan an old rival.  After Aubrey’s close call she escapes home to her brother with Ethan.  Ethan finds out some devastating news and soon plans revenge and a way to get back what is his.  Unfortunately, due to the sadistic Sheriff Buxton everyone there is no easy way.  So with the help of Aubrey, Ethan tries to do all he can to get his land back.  Though Aubrey is helping Ethan she is also trying to get information out of Sir Crispin who still burns a torch for her.  As Aubrey gets closer to Crispin and Ethan’s priorities aren’t what she thought her feelings are getting confused.  Aubrey must choose her loyalties and with that her heart will choose who it really belongs to.
This robin hood like story was a very fun read.  I loved the twists and turns with the added drama of a historical romance.  The love triangle of Crispin, Ethan and Aubrey.  Aubrey’s character was so dynamic she really helped to propel the story.  I also really liked how as Aubrey’s opinion of both Crispin and Ethan changed so did their characters.  They really began to show their true colors.  There were a few times though that Aubrey was a bit frustrating, but she does redeem herself.  Overall, this robin hood like story was a great read that makes you rethink who is really the bad guy.